All work and no play makes for an extremely dull developer.

The code for this project has been posted to GitHub. It’s a great way to learn PureMVC and the PureMVC State Machine Utility.

There’s nothing like a deadline to get your motor running.

In 2011, RIM, makers of the Blackberry, released their tablet offering, and announced that they would support Adobe AIR apps. In order to get their Blackberry World app store loaded up with content, they gave any developer who had an app approved by launch day a free tablet. 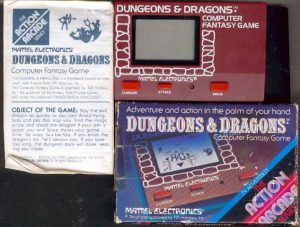 That was enough incentive to catch my attention, but what should I build?

I wanted it to be fun, since most of my day to day work is pretty serious stuff. And I didn’t want it to be so involved that it would take an inordinate amount of time to design and complete.

Then I remembered this great little LCD pocket game that I was addicted to back in the 80’s: Mattel’s Dungeons and Dragons. Like many of the best things in life, it was simple, but engaging. Click the product shot to the right and you’ll see the original manual. I didn’t have access to that at the time (someone posted this info on EBay much later), so I built Dungeon Joe from memory as my homage to that great little game. I wasn’t far off. I added one feature, though. See if you can figure out what it is…

Also, since this was for a tablet, I needed to make it touch-focused. Sure I could just use buttons like D&D, but instead I chose to use swiping for navigation. It remains in BlackBerry World, where it was fairly well-received.

Roam the 10×10 Dungeon in search of the Hidden Treasure and the Damsel in Distress.

Keep an eye out for the Magic Sword, which you will need to slay the Dragon, the Crystal Ball, with which to see the contents of Adjacent Rooms, and the Enchanted Rope, which will save you if you fall into a Pit. Beware the Wyverns who fly about the Dungeon and may carry you off to another room at any time. Go in Good Health, return Wealthy and Victorious!

Run It On Your Desktop

You probably don’t have a BlackBerry tablet, but you can play it on your Mac or Windows desktop!

You have a few seemingly simple goals: Collect the booty and slay the dragon, all before your health runs out.

Your character is Dungeon Joe, and you are roaming around a dungeon with a hundred rooms, connected in a 10 by 10 grid.  Thus, each room has 4 adjacent rooms to which you may exit. The room locations are denoted with a letter and a number, similar to a spreadsheet (i.e. D4 is row D, column 4).

At the beginning of each level, Joe enters dungeon in good health. This runs down continuously, as the meter at the top of the screen during game play reminds you.

Enter a room with a pit without the magic rope and you die.

Enter the dragon’s lair without the sword and you die.

Fail to find and slay the dragon before your health runs out and you die.

The dungeon is populated with wyverns (bat-like dragons) that move continuously around the rooms and will carry you to a random room if they find you, or if you find them. You might get lucky and end up in the room with the treasure, but you might just as easily end up in the dragon’s lair! 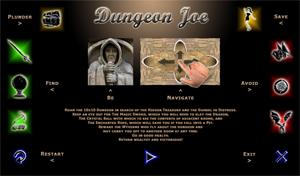 Fear not, there are tools to be found which can aid you in your journey. When you find one of them in a room, just tap (or click) on it to take it.

If you have the Magic Rope and you fall into a pit, simply tap (or click) on the rope and the pit will be magically removed from the dungeon, and the rope will be hidden in another random room, where it may be found again.

If you have the Crystal Ball, hang on to it until you find yourself in a real pinch. When you tap (or click) on the Crystal Ball, you’ll mystically be able to see the four rooms adjacent to you and their contents. 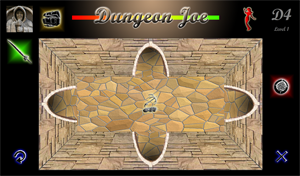 Surrounding the room display during game play are a number of indicators that tell you what’s in the rooms adjacent to you, and what you have with you.

To the right side of the room display, you see warnings about nearby Pits, Wyverns and the Dragon. Remember that even though there may be multiple Pits and/or Wyverns surrounding you, there is only one indicator for each. There is only one Dragon.

To the top of the room display, you see the booty you’ve collected or cutout slots if the Damsel or Treasure happen to be adjacent to you.

To the left of the room display, you see the tools you have collected or cutout slots if the Rope, Crystal Ball or Sword are nearby. 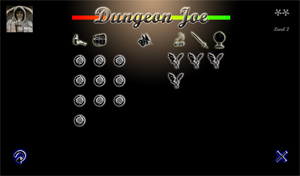 There are four increasingly difficult levels to the game, each of which has more wyverns and more pits which makes the going much tougher. At the beginning of each level, you will see a brief display of all the items that are being placed randomly around the dungeon.

Also, the Dungeon Master was fair enough to place the Magic Rope in the room with Joe at the beginning of each level, since it’s always possible that multiple pits could surround your random starting room.

As soon as you slay the Dragon on a given level, you move to the next level. 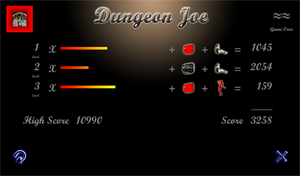 The score for each level is calculated from your remaining health (100 at the start of the level), plus 500 points each for the Treasure and the Damsel if you were lucky enough to find them, multiplied by the level number just completed.

The scores for all completed levels are added to arrive at your current or final score. This makes the maximum possible score 11,000.

Remember that the booty figures heavily into your score, so even if you’ve found the Sword and the Dragon, if you have enough health to keep searching for the Damsel and the Treasure, its well worth searching for. Just note the location of the Dragon, find some or all of the booty, and then return to slay the Dragon.